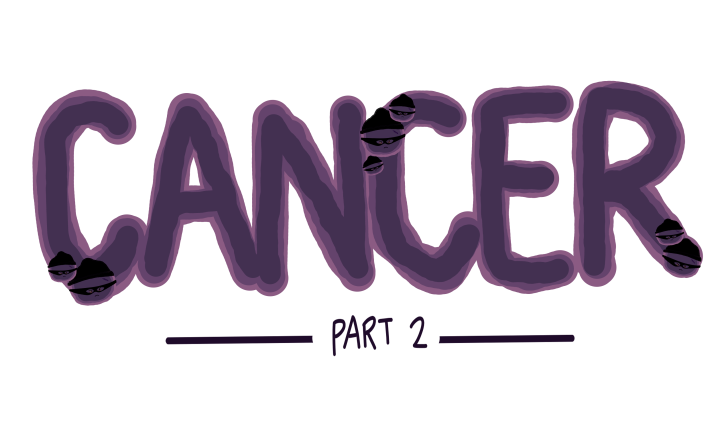 Last week we talked about the fugitive cells in our body that evade the police, gain a posse and take over. The way in which normal cells become cancer cells is through mutations. Mutations can be thought of as cancer drivers. Typically speaking, mutations can be grouped into two classifications: mutations in oncogenes and mutations in tumor suppressors. Oncogenes are mutated genes that have the potential to cause cancer. They can be thought of as the gas pedal in a car. Meanwhile, tumor suppressor genes are genes that can suppress cancer. They can be referred to as the brakes in a car. In cancer, an oncogene acts as though the gas pedal gets stuck to the floorboard and acceleration is rampant and uncontrolled. This will result in uncontrollable multiplication of cells that could create a tumor. Tumor suppressors, or the brakes, are the opposite of oncogenes and will not be able to “stop” the formation of cancer when mutated. This will result in constant multiplication of cells as well because the brakes are not functioning. Once there is a mutation in either of these, or even both, it acts as though your car, or body, is unable to stop.

So in what ways does a normal cell mutate to become a cancerous cell? Cells in your body are constantly growing and dividing, and both of these processes are regulated by specific proteins. This pattern of growing and dividing is referred to as the cell cycle. The cell cycle is composed of several different steps or stages and during each of these steps, different proteins act to make sure the cell is “fit” to continue to grow and divide. These specific checkpoints are critical for regulation. The majority of the time, cells that are “unfit” meaning they have mutations or some other abnormality, are not allowed to progress through the cell cycle; rather, these cells become quiescent (inactive/ dormant) or they apoptose (fancy word for cell death). However in the case of a cancer cell, oncogenes and/ or tumor suppressors help to push the cell past the regulating “checkpoints” of the cell cycle which allows these irregular cells to survive and multiply.

Proto-oncogenes are genes that have the potential to transform a normal cell into a cancer cell. Once a proto-oncogene is mutated, it gains the ability to transform cells into cancer cells and the gene is now referred to as an oncogene. If you remember back to our genes post, everyone has two copies of every gene. Oncogenes act in a dominant fashion, meaning that when one copy of a proto-oncogene gets mutated and thus permanently activated, it doesn’t matter if the other copy is normal or not. One mutated copy alone can cause cancer. As mentioned earlier, oncogenes act like the gas pedal on a car. When we have one mutated copy of a proto-oncogene (now mutated and referred to as an oncogene), it makes the gas pedal of our cell stick to the floor and the checkpoint proteins in the cell cycle can no longer stop the mutated cell. In the early stages, this means that one mutated cell goes through the cell cycle, ultimately dividing into two mutated cells. However, now the two mutated cells go through the cell cycle, ultimately generating four mutated cells. As you can see, the one mutated cell begins to divide exponentially (1, 2, 4, 8, 16, 32, 64…). This process of cell growth and division is the way in which our original “fugitive” cancer cell gains a posse. As mentioned last week, it takes a while for our original cell to divide into millions of cells which is why cancer is referred to as a latent disease, meaning it takes time for it to develop into something, like a tumor, that we would notice.

In summary, the development of cancer is a multistep process involving numerous genetic changes. Early events in carcinogenesis (cancer development) involve either 1) the activation of proto-oncogenes to oncogenes, which drive dysregulated growth or 2) the loss of tumor suppressor genes. Although exposure to carcinogens (cancer causing agents- post coming next week) plays a role in genetic damage, errors in DNA replication play a greater role (mutations in oncogenes/ tumor suppressors). The frequency at which these mutations occur in a given proto-oncogene is 1 per 10^6 cell divisions. However, in tumor suppressors (remember they must lose both normal copies),  the frequency of two independent mutations in both alleles of a given gene is 1 per 10^12 cell divisions (even though scientists predict these mutations occur at a frequency of 1 in 10^9). While these statistics suggest that mutations occur very infrequently, you have to consider the number of cells in your body and the number of times each one of these cells divides. This is one of the reasons why older people tend to develop cancer more frequently than younger people. As people age and their 30 trillion cells divide over and over again over the course of 70-80 years, there is a much higher chance for one of these mutations to occur, ultimately leading to cancer.

Thanks for reading and make sure to check back next week for PART THREE of our CANCER introductory post! In the meantime, let us know if you have any questions, comments or feedback and don’t forget to follow/like us!

Written by Megan and Denys

Disclaimer: We are not medical professionals and the above information is not meant to serve as diagnostic factors or medical advice. Further, the opinions in this post are our opinions and in no way reflect the opinions of our mentors or Medical University of South Carolina.